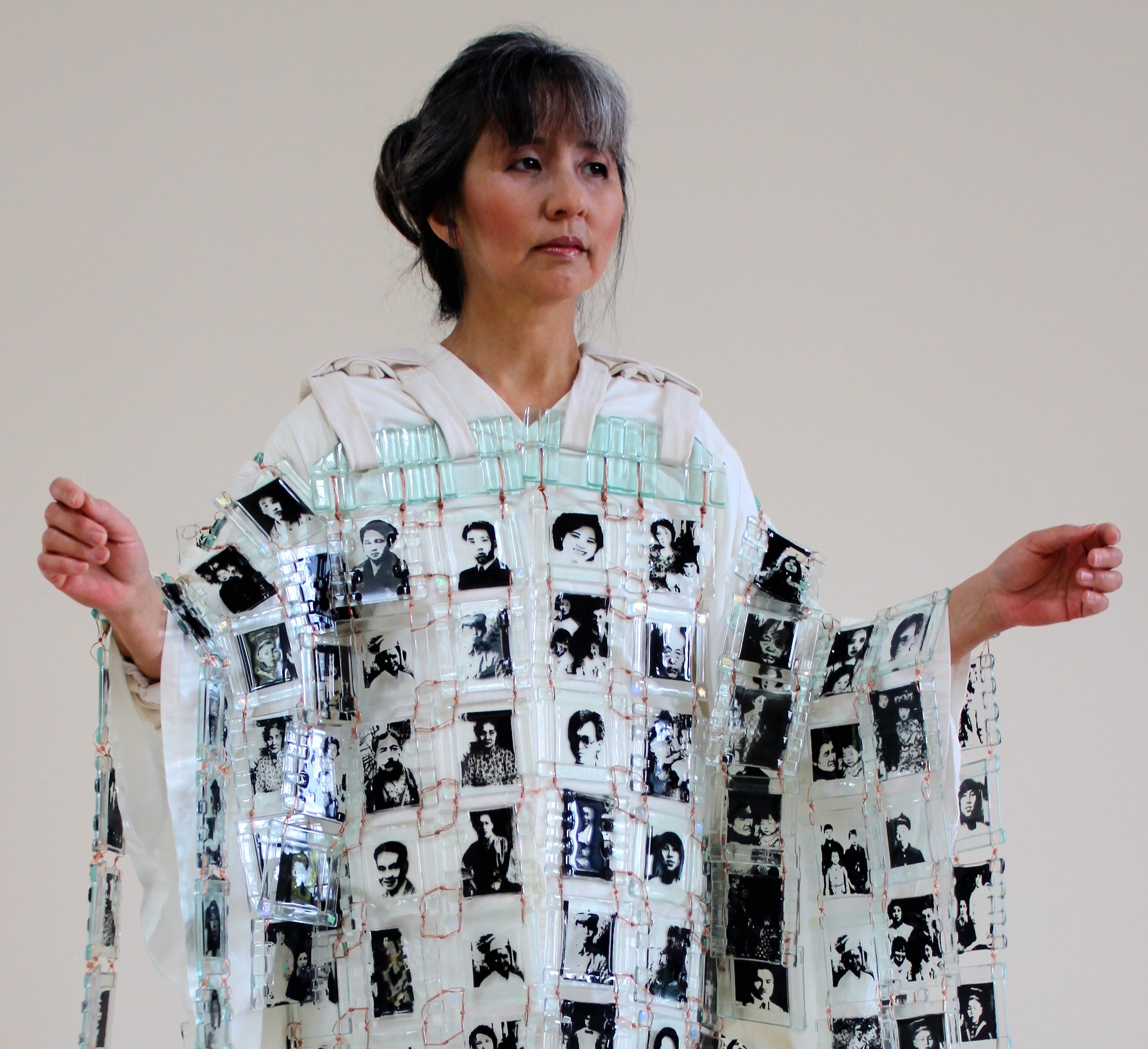 With a sensitive heart, an artist’s eye, and a determination to preserve stories, Reiko Fujii encapsulates snippets of the ordinary and not-so-ordinary using a multimedia approach that includes kiln-formed glass, performance, installation, photography, video, book arts, and found objects. Fujii feels a responsibility to create art that reminds us of the grave injustice that was forced upon a group of Americans during a time riddled with similar prejudice, greed, and ignorance that again threatens our democracy today. As an artist whose family was unjustly incarcerated during WWII, she aims to raise awareness by artistically highlighting the imprisonment of over 120,000 Japanese and Japanese Americans in American concentration camps. Her responsibility as an artist-storyteller is to preserve stories that go beyond the personal and touch the universal of who we are and from where we came. Her interdisciplinary technique of expressing herself encourages interplay between art and viewer, between story and audience, creating a meeting point where past and present can engage to further the narrative, carrying it forward into the future.

Bio
Reiko Fujii was born in Riverside, California. She currently lives in the San Francisco Bay Area. She received a Master of Fine Arts degree from John F. Kennedy University in 2004. She also earned a K-8 Elementary School Teaching Credential and a BA in Psychology, both from University of California, Berkeley. Presently, Reiko’s art “My Daughter’s Glass Ancestral Kimono” is in the “Our American Stories” exhibit at the Madeleine Haas Russell Gallery, City College of San Francisco until September 2014. She was one of the four featured Sansei (third generation) Japanese American women artists in the seminal exhibit “Distillations: Meditations on the Japanese American Experience" during August- September of 2010, at the John F. Kennedy University Art Gallery. Other exhibits include two multi-media performances, one sponsored by the Riverside Metropolitan Museum in 2007 and, in 2009, an invitation to perform at the Riverside Mayor’s Office’s Racial Equality Week. Also in 2009, she and her daughter were invited to wear her Glass Ancestral Kimonos as the “Featured Artist” at the Corning Museum of Glass in New York. She has exhibited at the Berkeley Art Center, the Bedford Gallery (Walnut Creek), di Rosa Preserve (Napa), Olive Hyde Gallery (Fremont), JFK University Art Gallery, the Sun Gallery (Hayward), Cal State Hayward Art Gallery, and SOMAarts in San Francisco. She was the recipient of the “Susan Seddon Boulet Award” from JFK University in 2004, received the “Steven P. Corey Award” at the 2006 PCBA Bookworks Exhibit, and also received several awards for her glass art at Ohlone College in Fremont, California. Her “Scrolling Book” is included with instructions in Eco Books by Larks Press, copyright 2009. Her Grandma, the Ultimate Recycler handmade book is part of the Special Collections of the Olin Library, Mills College, Oakland, CA.! Her short documentaries have been shown at the “Women of Color” Film Festival (Berkeley), the Berkeley Small Films Festival, and the “Society of California Pioneers” (San Francisco). Her nine minute documentary, “Arden Farey: Whistlebower” was featured as “The Video of the Week” on KarmaTube during the first week of January 2009. Her half-hour documentary about Arden Farey, a talented artist who suffered from MS and was a paraplegic, was shown on v!arious cable TV stations in the Bay Area in 2008.
Location
San Francisco Bay Area
Ethnicity
Pacific Islander/Native Hawaiian
Disciplines
Book Arts
Film/Video
Mixed Media
Visual Arts
Mediums
Digital
Experimental
Installation
Narrative
Non-fiction
Photography
Sculpture
Video
CV
Download PDF