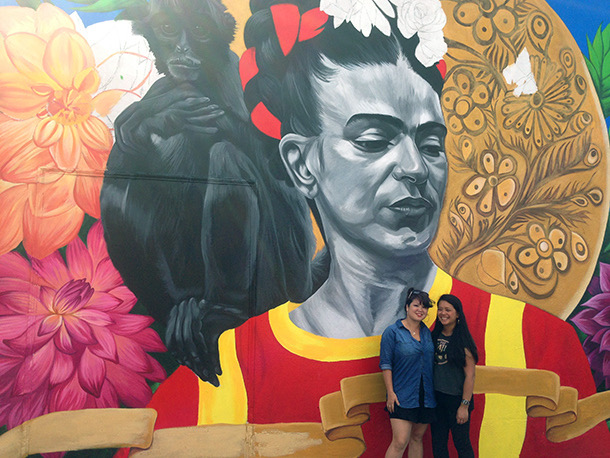 Elaine Chu and Marina Perez- Wong are the dynamic duo behind the mural arts collaboration Twin Walls Mural Company. They believe in the power of visual narratives to capture and reflect a community's history, struggles, dreams and intentions.

Both San Francisco natives, Elaine and Marina met at the Ruth Asawa San Francisco School of the Arts in 1997 and instantly formed a friendship. They began painting murals with Precita Eyes Muralists Association under the guidance of Susan Kelk Cervantes who became their mentor and close friend (Or as they call her “art mom”).

Each mural they worked on collaboratively brought them to the realization that they work like twins when painting. Ideas flow like water between the two and whatever one twin prefers to paint the other does not and vice versa. They formed TWMC in 2013 and have since designed and painted over 30 murals in the Bay Area and New York City.

Elaine and Marina are both motivated by the healing of trauma both current and generational, and the transformation of the viewer and themselves through visual language, color and collaboration. Together their partnership continues to flourish with intricate visual stories of hope, balance, and community. Their work reflects growing up in the Bay Area, celebrating the women and individuals who inspire them, and changes they wish to manifest through bright colors and semi realism.

Twin Walls Mural Company continues to set an example for future generations of strong independent women of color in the art world. Though they may be small in stature, they paint their dreams BIG! “The smaller the world expects us to be, the larger the surfaces we'll paint!” TWMC for the world.